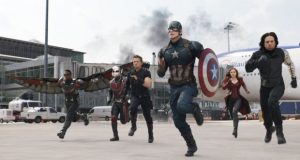 First the European premiere of “Captain America: Civil War” took place, the latest superhero film from Marvel Cinematic Studios and the 13th film in the Marvel Cinematic Universe (MCU). I’ve seen it and I’ll go to see it again. The story delicately integrates numerous superhero characters into a battle with ramifications for not only the superheroes but also for the world.

Second, and of greater significance for me, “Secrets of Superhero Science” was the subject of an in-depth article written by Dick Ahlstrom and published in the Irish Times Thursday Science Page on the 28th April 2016. The article excellently captures the essence of the book by discussing elements of the scientific content in the book and how it relates to superheroes such as Iron Man, Hawkeye and the X-Men, which are all the subject of chapters in the book.

I’ve never had national media coverage before and it was a thrill to see an article about my book in the Irish Times. I am immensely proud of this achievement and thank Dick Ahlstrom and the Irish Times for the article on the book and also publishing it in the same week as release of the “Captain America: Civil War”.

If you want to read more the article you can click here.