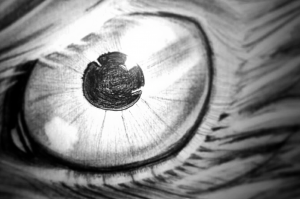 The eye of a hawk (Image by Jean-Philippe Frimat).

With Captain America: Civil War about to hit cinemas this week, it’s an understatement to say that I’m very excited about its upcoming release. The film will be the 13th release from Marvel Cinematic Studios, and a film jam-packed with superheroes.

The film sees Iron Man and Captain America disagree about a series of accords or laws, known as the Sokovia accords, that are put in place to monitor superhero activity and police the use of their powers. Iron Man believes the accords, which were drawn up by the UN, must be obeyed while Captain America believes that following the accords will simply satisfy the agenda of politicians around the world. This disagreement leads to a fracture in the Avengers and sees friends facing off against friends in what will prove to be an unforgettable war.

Among the huge number of superheroes in Captain America: Civil War are Spider-Man, Ant-Man, the Falcon, Hawkeye, Black Widow and the Black Panther. As you can see each of these characters includes an animal, bird or insect reference in their superhero name. Wolverine, Sabretooth, Beast and Raven of the X-Men also include animals or birds in their names. So why were the comic book writers at Marvel infatuated with the idea of linking characters to animals, birds or insects?

The answer may be very simple. Many insects, animals and birds possess abilities that many people would simply like to have. In terms of birds, their most obvious ability we would like to mimic is flight.  Falcon, who is on Team Cap in Captain America: Civil War, is able to fly thanks to his winged-jet pack. On the other hand, Hawkeye may not fly but he does have impressive eyesight, synonymous with birds of prey such as hawks. Ant-Man and Spider-Man are named after insects because their powers are reminiscent of the abilities portrayed by ants and spiders respectively. Some ants can lift objects that have masses up to 5,000 times their own body mass, an ability that would be true super-strength in the human world. As Spider-Man, Peter Parker is able to scale walls and fire web at assailants – both of which are popularly associated with spiders of course. I’m sure many of you would love to be able to climb walls, buildings or mountains just like Spider-Man. Some of you might not like the idea of producing spider-silk from your wrists, however.

These animal-, insect- and bird-like powers have proved central to many of the superhero adventures to date and will do so in future superhero films. In Captain America: Civil War, these powers will be crucially important for the overall storyline and the intricate plot turns in the film. But if you were to have an animal-, insect- or bird-like ability which one would you want?

You can read about the powers of Hawkeye and Spider-Man in more detail in my new book “Secrets of Superhero Science”.