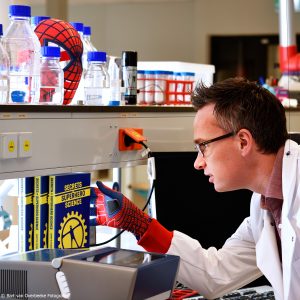 St. Patrick’s Day, the 17th March, is a hugely important day in every corner of Ireland. In case you don’t know anything about St. Patrick’s Day, it is a day of cultural and religious signifiance in Ireland that celebrates the life of the patron saint of Ireland – St. Patrick. On St. Patrick’s Day there is a huge parade in Dublin while the other cities and towns in Ireland have their own themed parades. Added to that a few pints of Guinness are also consumed to mark the day.

This year was doubly significiant for me as the first article about my book “Secrets of Superhero Science” was published in the Cursor newspaper in Eindhoven, which is the TU/e (Eindhoven University of Technology) paper. In addition to having an article about the book I also made the frontpage of the newspaper. A double bonus on St. Patrick’s Day! The article is excellently written by Judith van Gaal and the cover photo was taken by Bart van Overbeeke.

You can read the article in both Dutch and English.